August 22, 2019
We have several sewing machines in our workshop and they are on full view so that people who visit us can see us working on them.   Because of this we often get asked about people's problems with their machine, or asked advice about what sort of machine to buy.

One service that we offer is an introductory one-to-one course "Get to know your sewing machine".  At a mutually convenient, pre-arranged time you can come with your sewing machine and I will go through it with you step by step explaining how it works, the importance of good maintenance, giving advice about stitch choice, tension, bobbin winding and so on.

Recently a young woman came in with her very elderly Singer machine which had sat un-used in a cupboard for about 10 years.  This prompted me to get out some of my older machines and have a good look at them again.    I thought people might enjoy seeing some photographs and reading a bit about them, why we chose them and what we have done with them.

First of all, I should point out that I am not affillated to any sewing machine manufacturer or retailer.  The views expressed here are a result of personal experiences and I have nothing to gain by making either positive or negative remarks about any machines.

Next thing to point out is that I do prefer Bernina machines over any other make, but that is mostly because they are what I use and therefore what I am most familiar with.

I was told by my mother that I was doing hand-sewing before I could read.  I don't really remember 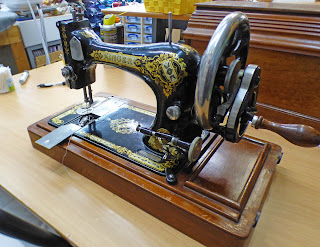 much of that, but I do remember the first time I was allowed to use her Singer sewing machine.  I was 10 years old and had just grown tall enough to be able to reach the foot pedal so I could actually operate it.   We no longer have this machine but I was recently asked to give a home to one that is very similar.  The difference is that my mother's machine had been converted to an electric one by means of a special kit that Singer provided whereas this one is a hand operated model.
As a child, I loved watching the bobbins winding.  It is a boat-shaped shuttle and the bobbins are long and thin rather than the fat, stumpy bobbins in modern machines - and by modern, I mean anything post 1940s.   There is a small heart-shaped cog that guides the thread back and forth along the length of the bobbin as it turns ensuring an even spread of the thread.  It is a beautiful piece of engineering and I am sure it is what instilled my love of machines.
Eventually my mother traded it for a Pfaff machine that could do zig-zag stitching - possibly a more functional machine, but rather ugly by comparison.  However, I continued sewing and by the time I was 13 I was making all my own clothes.  In those days (late sixties) mini skirts really were "mini" and I was really skinny so it didn't take much fabric to make a skirt!

When I was 17 I left home to go to university.  I found it very frustrating not having access to a sewing machine whenever I wanted, so between my first and second years I took a job in a hotel for 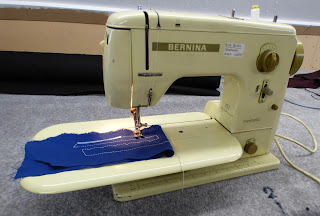 the summer holidays and worked really hard to come home with just enough money to buy my own machine - a Bernina Minimatic 707.   I still have this machine.  It still works beautifully and although we now have a selection of very modern electronic machines that we use on a daily basis, I still get this one out for particular tasks.   It proved a very sturdy and versatile machine.  The great improvement over my mother's Pfaff was that this had a selection of stitches available, not just straight or zig-zag.   Since I bought it in 1972, I have made everything from underwear to wedding dresses, cycle paniers to tents, sleeping bags, jackets.  It was in more or less constant daily use until about 1995.    At that point it needed a repair and while I was waiting for that to happen I bought a new machine.    Over the years that machine proved a very good investment.  I paid £72 for it back in 1972.  The same model often sells on eBay for £300 plus........ 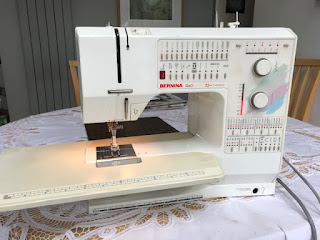 stitches.  It also had a panel held in place by little magnets that could be swapped for another panel allowing an alphabet to be stitched out in two different fonts - block or curly lettering.   This machine is still in use, but currently by a friend who has it on long-term loan.   It was with this machine that I really got into the way of doing decorative embroidery, particularly free-motion stitching.   That in turn led to me creating some more imaginative pieces for my husband's church vestments - and that led to me getting commissions from other people ....... and so on and sew on......

During this time my mother replaced her Pfaff three times and then switched to a Viking Husqvarna which she replaced twice, each time saying a Bernina was too expensive.   When the second Viking failed I offered her my 1260 and bought myself a new Bernina - this time a 170.  It is currently 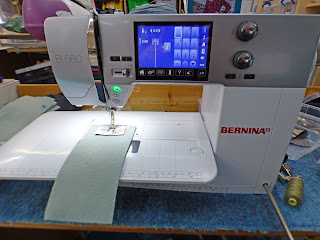 being used by my granddaughter when she works at home.  When my daughter joined me  in the business I invested in another machine - this was a 165 - as we both needed to be able to use machines at the same time.   Eight years ago for family reasons I could no longer work from my home so moved to The Workshop, but this meant we really both wanted a machine at home and a machine at work, and now that Rachel works with us too, that is another machine that has to be duplicated.  So the two 165s and the 170 are home based machines and we now use a 640 and two 560s at The Workshop.   My daughter and granddaughter may use them, but I still own them!

This brings the total count of machines that I currently own to 9...... but I really need another one.  I am on the look-out for a secondhand industrial machine for some of our heavy duty stuff.

I have bought so many sewing machines over the years that I completely trust my dealer.  If I need a new machine (as I did when Rachel came to work with me) I was happy to just lift the phone and say "please send me another Bernina 560".  But normally I would say always try before you buy and it is worth going to a dealership that will throw in a free lesson as part of the deal.

If you want to know more about how sewing machines work.....

Many years ago (1986?) Channel 4 did a lovely series called "The Secret Life of Machines".  There was an excellent episode about the sewing machine - it's history and how it works.  If you have a spare half hour it's worth watching - on youtube at https://www.youtube.com/watch?v=g_qLCdrbU78

If you want to see our machines in action come and visit us at The Workshop, Inchmore, near Inverness

April 29, 2020
Yesterday, 28th April 2020, the Scottish government announced they had decided to recommend the wearing of face coverings in a bid to limit the spread of the Covid-19 corona virus.   The idea is that they limit the chances of someone who may be infectious from spreading the virus to other people, rather than as a way of avoiding catching the infection. So I did a trawl of the internet looking at patterns and instructions for making such things.  They ranged from okay, but with limited detail to totally hopeless.    I fixed on one style that to me looked neatest and most effective and set about figuring out how to make it so that it fits my face.  I have a small face (despite people thinking I am rather "big-headed!) and it was obvious that the dimensions given were not appropriate for me.   If the mask isn't a good fit, it's no use to man nor beast! Here is my method, starting with how to take your own measurements so you can make them to fit you. Step 1 - Measure yo
Post a comment
Read more

May 30, 2020
For a very few days each year the blue irises in our garden are in bloom while the marsh marigolds are still flowering.  The complimentary colours of yellow/gold and purple/blue  are wonderful to behold. We are enjoying a little heatwave just now so the other day I sat in the garden and did a little watercolour sketch of an iris.    And today I set about making an interpretation of these flowers in felt. The first step was to select my colours of merino wool fibres.  It was definitely a question of blending as nothing I had was quite right for the irises - which are somewhere between blue and purple.  I decided on the inlay method - that is, make some pre-felt for the various components of the piece and cut them into the various shapes that I wanted.  The process of painting the flowers is helpful because it helps to analyse how the flower is formed.  The iris has three petals that point up into a peak, three smaller petals that spread out horizontally and a further three large petals
Post a comment
Read more

November 20, 2017
I am Ruth Black - a textile artist working along with my daughter and granddaughter in the Highlands of Scotland.  "The Workshop"  is an old wooden building in the village of Inchmore, just 6 miles from Inverness in the Highlands of Scotland and dating from the mid 19th Century.  Originally it served as a joinery workshop but now it is home to a three-generation family team working with a variety of textile processes, fibres, fabrics, yarns and threads. When we first took up occupancy of The Workshop in 2011 the main focus was to carry on our family business, Anna Macneil. Anna Macneil (aka Barbara Morrison, 1929 - 2017) started making hats using Harris Tweed from her home on the Isle of Lewis when she moved there in the 1980s.   She was joined in this venture by me, her daughter, in the 1990s but she continued making hats until a combination of poor health and failing eyesight made it no longer possible. However, the business is still carried on by me with help f
2 comments
Read more