Symbolism in my Ecclesiastical Stoles

September 15, 2019
At The Workshop we all work together on some things, but we also have our own areas of specialism.  Mine is in Ecclesiastical embroidery - designing, embroidering and making vestments and paraments for use in churches.  www.angelforce.co.uk

Sometimes people choose to buy a stole with one or other of my regular designs, but more often than not there is at least some degree of customisation.   I am known for my stoles with Celtic designs that also feature tartan.  For some people, simply choosing which tartan they want is enough, but for others it is important to get the symbolism right.
This can be achieved in a variety of ways.   For example the stole might incorporate a cross that has significance to the client, or perhaps has representation of some architectural feature of the church in which they serve.
For many, there is a particular saint that has significance.  In the past when literacy was not common, most saints had symbols that helped people to identify them.  Examples of this are St Peter, identified by the crossed keys of the kingdom of heaven and St Andrew with the Saltire cross.
Over the years I have made more stoles than I can count (and definitely more than I can remember without looking at the pictures), but I thought people might find it interesting to see some of these pictures along with explanations of the symbolism. 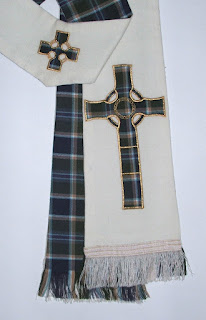 The cross is recognised throughout the world as the principle symbol of Christianity.   And when it has a ring around the intersection of arms and shaft it is widely recognised as "Celtic".  The British Isles, particularly Ireland, the western parts of Great Britain and the smaller islands of the west have hundreds of examples of this form, carved in stone either as free-standing crosses or on a slab of stone.  They range from very simple incised lines to elaborately carved megaliths.   Over the years I have interpreted many of these in my embroidery.  Pictured right is the St John's cross from the Isle of Iona.  When I use them on vestments, their significance to the wearer is usually to do with the place of the particular cross.   However, it has been suggested by some scholars that the circle around the cross represents the perfection of heaven.

The authors of the four Gospels are St Matthew (shown as a winged man or angel), St Mark (shown as a winged lion), St Luke (a winged ox) and St John (an eagle).   There are many scholarly works giving lengthy explanations about how and why the Evangelist came to be depicted in this way, but it has been going on for centuries.   Early representations of them appear in the Book of Kells - an 8th century illuminated Celtic manuscript - see https://www.tcd.ie/library/manuscripts/book-of-kells.php
There are many illustrations throughout this Gospel book, 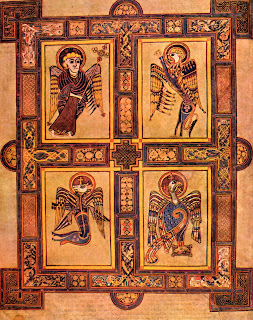 but one of my favourites is this one - Folio 27v.
I have used it as a starting point for many stoles such as this one pictured right which has been made using the Scott tartan.
A simple explanation of the symbolism is that St Matthew in his Gospel concentrates on the humanity of Christ, St Mark emphasises the kingship of Christ, St Luke talks of the sacrificial quality of Christ and St John concentrates on His divinity.

Martyrs are often symbolised by the manner of their death.  For example St Paul, being a Roman citizen, was executed by the sword, so is usually symbolised as a sword with an open bible on top of it.   It can be challenging to depict these saints in ways that are not too gruesome for the modern observer.
Perhaps the most difficult of these is St James the Less - who met his death by being thrown from the highest pinnacle of the temple in Jerusalem before being clubbed to death with a fuller's club and then being sawn into pieces.  On this stole if you look closely you can see the saw and club superimposed on the cross which is balanced on the pinnacle.  St James was leader of the Chruch in Jerusalem.  The knotwork below the pinnacle is a nod to Jesus's instruction to the disciples that he would make them "fishers of men." 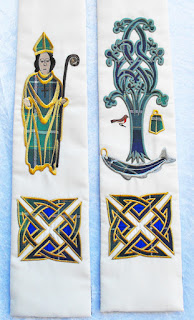 Not all saints met their death in an untimely manner.  For these, their symbols are more likely to do with features of their lives, for example, St Francis of Assisi is usually depicted with lots of animals and birds around him.   Nearer to home, St Cuthbert has several animal associations, the most notable being the story of the otters drying his feet with their fur and the eider ducks that he tamed.  The eider duck in that part of England is often referred to as a Cuddy Duck, Cuddy being short for Cuthbert.
Even closer to home is St Mungo (or St Kentigern) and the symbols associated with the miracles he performed have been incorporated into the coat of arms of the city of Glasgow of which he is the patron saint, with the ancient cathedral dedicated to him.

For some of my clients, where they come from is an important part 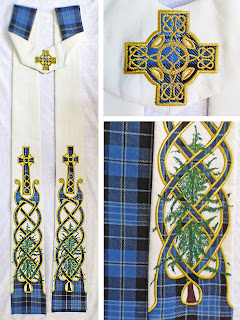 of their journey.   Incorporating a feature that acknowledges this can sometimes be tricky - such as combining the state tree of Washington State (USA) with Celtic knotwork - pictured left.

Flowers have often been associated with particular saints, especially Our Lady, but this is more because they represent certain good character traits such as violets for modesty (bowing their heads).   Pinks (Dianthus) hold a deep Christian significance. They were associated with the nails used in the Crucifixion and coronations, while the name dianthus translates to “flower of God” (from the original Greek Dios for Zeus), and can be found represented in numerous illuminated manuscripts.

Angels are referred to throughout the bible in both old and new testaments.  They also feature widely in illuminated manuscripts.   In the Book of Kells
many of the full page illustration have at least one angel.  While sometimes I will try to copy a particular angel from these illustrations, one of my most popular stole designs is my "Celtic Angel".  In this design, I tried to capture the essence of style but adapted it into some knotwork.   Pictured left is a green stole with the angels and lining done in the St Ninian's Day tartan.

There are no known written references to what particular forms of Celtic designs mean - are they purely a decorative style, or do they have specific spiritual meanings?   There are four main types of design that make up the style that is broadly classified as "Celtic" - knotwork (interlace), key patterns (mazes), spirals and zoomorphic designs.  In addition there is human representation and writing.
For the knotwork, it is generally considered that "good" knotwork design consists of a single line with no beginning or end that makes up the whole of the design.  There is a generally accepted assumption that this symbolises eternity, but terms such as "lovers' knot" or "friendship knot" are modern concepts invented for purposes of marketing rather than having any historic significance.
Spirals (and sometimes knots) often have three elements to them and this has often been assumed to represent the concept of The Holy Trinity.  It may well have been used in this way in centuries past, and is certainly used today, but it was also used prior to the advent of Christianity and its original meaning never recorded.

So...... the important thing is beauty and that beauty being used to the Glory of God.  One can read into the designs whatever one wants.  They can have multiple meanings or they can simply be visually pleasing.  For me, Celtic design appeals on several levels.  One is quite simply the challenge of "getting it right", but I also want to convey a sense of wonder and beauty.  I try to create embroidered vestments that have significance to the wearers in a way that will boost their ministry and help them to serve in their roles as priests and ministers, whatever their particular religious practices and wherever they are in the world - while at the same time letting them feel they have a link to Scotland and our Celtic heritage.

April 29, 2020
Yesterday, 28th April 2020, the Scottish government announced they had decided to recommend the wearing of face coverings in a bid to limit the spread of the Covid-19 corona virus.   The idea is that they limit the chances of someone who may be infectious from spreading the virus to other people, rather than as a way of avoiding catching the infection. So I did a trawl of the internet looking at patterns and instructions for making such things.  They ranged from okay, but with limited detail to totally hopeless.    I fixed on one style that to me looked neatest and most effective and set about figuring out how to make it so that it fits my face.  I have a small face (despite people thinking I am rather "big-headed!) and it was obvious that the dimensions given were not appropriate for me.   If the mask isn't a good fit, it's no use to man nor beast! Here is my method, starting with how to take your own measurements so you can make them to fit you. Step 1 - Measure yo
Post a comment
Read more

May 30, 2020
For a very few days each year the blue irises in our garden are in bloom while the marsh marigolds are still flowering.  The complimentary colours of yellow/gold and purple/blue  are wonderful to behold. We are enjoying a little heatwave just now so the other day I sat in the garden and did a little watercolour sketch of an iris.    And today I set about making an interpretation of these flowers in felt. The first step was to select my colours of merino wool fibres.  It was definitely a question of blending as nothing I had was quite right for the irises - which are somewhere between blue and purple.  I decided on the inlay method - that is, make some pre-felt for the various components of the piece and cut them into the various shapes that I wanted.  The process of painting the flowers is helpful because it helps to analyse how the flower is formed.  The iris has three petals that point up into a peak, three smaller petals that spread out horizontally and a further three large petals
Post a comment
Read more

November 20, 2017
I am Ruth Black - a textile artist working along with my daughter and granddaughter in the Highlands of Scotland.  "The Workshop"  is an old wooden building in the village of Inchmore, just 6 miles from Inverness in the Highlands of Scotland and dating from the mid 19th Century.  Originally it served as a joinery workshop but now it is home to a three-generation family team working with a variety of textile processes, fibres, fabrics, yarns and threads. When we first took up occupancy of The Workshop in 2011 the main focus was to carry on our family business, Anna Macneil. Anna Macneil (aka Barbara Morrison, 1929 - 2017) started making hats using Harris Tweed from her home on the Isle of Lewis when she moved there in the 1980s.   She was joined in this venture by me, her daughter, in the 1990s but she continued making hats until a combination of poor health and failing eyesight made it no longer possible. However, the business is still carried on by me with help f
2 comments
Read more