The Hilton of Cadboll Pictish Stone - a design for a stole

Here in the north of Scotland, we have been in a covid lockdown for a month.  We have been told by the government to work from home if we can, so as I had lots of design work to do and no urgency on any of the making, I brought the computer home - good excuse because it's warmer here than in my workshop!

The only interaction I have had with the rest of humanity has been through the medium of Zoom - for conversations with family, for church services and the occasional face-to-face with a client.

A couple of weeks ago one such meeting took place and my client has commissioned me to design and make her ordination stole.   In the past she had worked on the Hilton of Cadboll project which was a "millenium project" - part archaeological excavations and part having stone mason Barry Grove carve a replica of this famous Pictish stone. 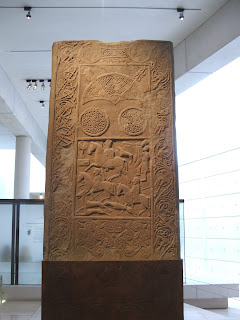 The original stands on display in the National Museum of Scotland.  The "new" one is not so new now.  Looking for my photographs of the replica as a starting point for my stole design I saw that I had taken this photograph September 2003.  I am fairly certain that at this point the cross face was surrounded by a wooden shed to provide shelter for the carver as he was working on the east (cross) face of the stone.  In the intervening 17 years it has weathered in well but the detail is still crisp and clear.

Today, while it was cold with hazy cloud, I decided it was nice enough to venture out and make the 40 mile trip north to visit the stone and get some better quality pictures.  (Digital photography has improved quite a lot during this time!)

The views coming down the hill towards the Cromarty Firth were stunning, so I pulled into the layby just before the causeway and took a couple of pictures. 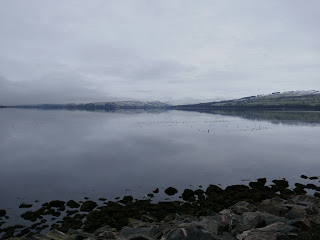 Then it was onwards to my destination.  The stone stands on the spot that is believed (through archaeological digs) to be its original location beside the site of an old chapel (now just a grassed-over pile of stones).   I arrived at just the right time of day to get the best light for photographs.  The sun was just about breaking through the thin cloud and striking the stone side on, which improves the shadows and helps to see the detail. 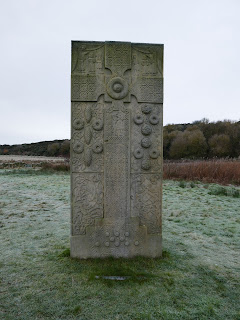 The parts of particular interest for this project are the two vinescrolls at either edge of the west face of the stone.  They depict curious beasts feeding on the true vine.  There are 11 different creatures on each side and the two sides are not identical. They are all winged creatures, some have two legs, some four.  Some have long tails, others crests in varying degrees of complexity.

Back in 2005 I made a wall hanging inspired by part of the right-hand side vine.  It was part of an exhibition of my work featuring pieces inspired by the Pictish Stones of Ross-shire.  This piece was done using the process of needlefelting.  I am looking forward to starting work on translating today's photographs into embroidery.

After my "work" taking lots of photographs I went for a quiet stroll along the shore - that's my exercise for the day!

A Guide to Commissioning a Liturgical Stole

January 14, 2021
This post is aimed at those who may never have purchased a stole before.  Perhaps you are preparing for ordination or maybe you are commissioning a stole as a gift.   There are so many possibilities for a stole that it is difficult for some people to know where to begin.   Here I try to guide you through the process and ask you to consider many different things so that you can arrive at the right decision when it comes to making that purchase or placing an order. The stole is an ecclesiastical vestment worn by ordained clergy in most western Christian traditions during church services. The wearing of stoles goes back to the very earliest times of the Church and references Jewish traditions as described in The Old Testament.   "And thou shalt make holy garments for Aaron thy brother for glory and for beauty" (Exodus 28:2).  It is a long, narrow strip of cloth, usually embellished in some way and is normally in the specified colour for the liturgical season - although some P
Post a Comment
Read more

November 28, 2022
The process of designing and making a stole has many steps.  In this post I hope to give an insight into what is involved so that you will understand how I work. The first step is a discussion with the client.  This might be in person at my studio or at a vestments fair at one of the theological colleges.  It might all be conducted through emails, or it might involve a combination of zoom chats and emails, with perhaps the odd telephone call as well.   Whichever way the discussions take place, the important thing is that we arrive at an outline of what the client wants that works with what I am able and willing to make. Designs often evolve through this discussion process.  A client might start off simply asking me to make a design exactly as they have seen in an earlier photo of my work, but then through discussion they become aware of different variations.     In one of my Google Photos albums I have posted photos of my Celtic Angel design so that you can see the huge range of design
Post a Comment
Read more

April 27, 2021
I have just taken delivery of a new loom - but it's all in pieces!  Scandinavian flatpack..... The loom is a Toika from Finland and I chose the 16 shaft Llisa model with computer dobby.    It arrived beautifully packed in a large wooden pallet box which for some reason had been put on top of a standard pallet which was too small to properly hold the box.  However with the aid of some extra strapping and a bit of muscle power from my neighbour we managed to get the box across the gravel driveway and into the loomshed. I had read somewhere online that it needed a crowbar to open the box, so I was prepared for that.  But there were two steel straps tensioned around the crate.    Fortunately my side-snip wire cutters were up to the job and I managed to chew through the straps and set to work with the crowbar. Inside, all the pieces were well wrapped, anchored and secured so it took a good hour or so just to unpack the box.  At the end of that there was an enormous pile of polystyrene
Post a Comment
Read more